Well I must say that I don't have tons to write about, and there's little point in writing a blog post just for the sake of writing, so I will keep this one short.

I think the most interesting thing on my mind lately is related to the fact that, about 2 weeks ago, we marked the 1-year anniversary of having returned from Europe. Yes, we've been back a year.
Now I can't speak for Christina, but for me this is notable because my perception of time has differed greatly between those years in Europe and this year being back in Taos. (I wrote about a similar topic about two years ago...) In short, time has moved much more quickly since being back, and has been punctuated by far fewer memorable experiences.
Now, time is obviously not actually moving more quickly, so this is clearly a problem of perception. My leading theory is that it comes down to novelty. In Barcelona and Berlin, everything was new and novel, and I think those kinds of experiences lodge themselves in the brain in a different way; they are by definition more 'memorable,' and when you fill a period of time with 'memorable' experiences it feels richer, and slower. By contrast, life here sometimes seems to go by in a blur. This is not only a strong argument for the merits of travel, but it is also, in contrast, a strong invocation to consciously change the way one experiences daily life. Because no two days really are the same... every moment and every day is rich in new experience and the challenge is to really be present to that. If your life does go by in a blur, I think that you are - on some level - not doing it right. Not necessarily easy.. but that's why I use the word 'challenge.'

We are gearing up for Burning Man.
Christina's project is looking really beautiful, and we will be building it right up until the last minute! Luckily we have two friends staying with us, good old friend Fergie from Phoenix and new friend Laurita from Latvia, both of whom are talented metal fabricators and who are helping push the project through to completion in these last few weeks.

With a little encouragement from Christina, I finally built an old idea of mine, which is a double-tall-bike vehicle for our family to get around on at Burning Man. 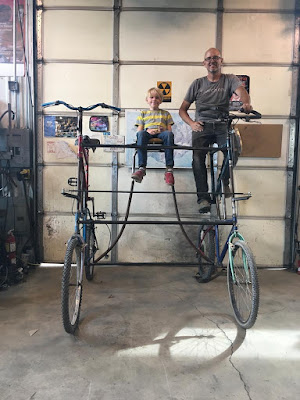 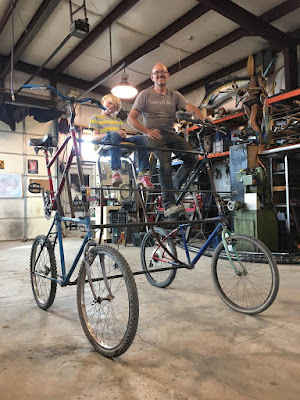 It's basically two tall bikes joined together into a 4-wheeled vehicle, with a seat in the middle for Kodiak. It's currently referred to as the 'Chariot of Destiny.' It does now have a flamethrower (propane 'poofer') on it, which was not yet installed at the time of these photos.

I decided to buy the artwork inspired by L'Origine du Monde which I wrote about in my last post, after negotiating with the gallerist for a lower priced, smaller print of it. I really love that piece. And another work from that gallery led me, indirectly, into an online confrontation with a really pathetic misogynist, in which I pretty much destroyed him. I'm not linking it here cuz I don't want him and his troll army finding me. Weird story. Email me if you want the whole story and the link.