Oh boy, one really does not feel much like blogging when things are not going quite as well.

Isn't that the way it is with all social media though? And perhaps with all social interaction? When it's one bit of exciting news after another, it feels glamorous and exciting to share it with the world. And when things feel more like a slog, why bother? Plus, it doesn't put out the right "image." (I say that tongue in cheek, with a roll of the eye - I think the skewed "image" that people put out on social media is understandable, but also "unnatural," and a main component of why people feel / bad when they spend lots of time on Facebook.)

So yeah, things have been a bit of a slog lately. It's been 10 days of dealing with 3 crises.

Crisis 1: When you have a kid, making sure the kid is doing all right is priority number one. Not only does it FEEL like it must be job number one, the truth is that there are major consequences for the family if he is not OK. Finding the right school for Kodiak has been a whole hell of a lot tougher than we'd imagined. First, we found an English/Spanish/Catalan school online that looked simply amazing - that was how they represented themselves on the web anyway. We pulled him out after exactly 10 days; it was small, strict, and depressing. Next was another trilingual school in which he fared better; at least this one had a few native English speakers and an actual playground. But after four months, it was clear that an atmosphere of strictness, punishments, rigorous classes, and a permissiveness towards bullying in the guise of "let the kids work it out" was too different from the supportive, creative, and freedom-filled education Kodiak was used to from New Mexico. It was slowly killing his spirit, and he was rebelling with growing force. Like I said, there were repercussions for the family.

So we made the tough decision to pull him out. Luckily, old friends from my teenage years in San Francisco have lived here for decades, and one of them has her daughters in a very progressive and liberal school way out in the hills at the edge of town. The big concern for the moment is that this place is NOT trilingual... Spanish and Catalan only, and Kodiak's uptake of Spanish has been slow. He has only spent about one week there so far, but the early indications are promising. Last week, while Crises 2 & 3 were unfolding, Christina and I were trading off days, spending the each entire day at his new school with him, to ease the transition. Did I mention the school way out in the middle of nowhere? One hour on public transit, each way.

Crisis 2: One learns a lot about oneself when doing a big experiment like suddenly moving to Barcelona for a year. Christina and I have each learned interesting things about ourselves. Really, this deserves its own blog post (or section thereof), but suffice to say that I am very comfortable in the heart of downtown Barcelona, and Christina is progressively unhappier here. The constant crush of people, which only threatens to get worse as summer approaches, is looking more and more like a deal-killer for her. In addition to being located in the epicenter of town, our flat also lacks outdoor space and workspace, two big strikes "against."

So, we started looking for a place to move to, and we actually found something that looked like a little paradise. Just out of town, with a garden and space to work, and strangely affordable. We fell in love. But the market is tough here - fast and competitive. So, while we spent days helping Kodiak adjust to his new school, we were also firing off emails and making phone calls trying to be the first ones in line for this cool place. In the end, we failed. Someone else got their ducks all lined up first. It was disappointing. We keep looking.

Crisis 3: But the problem that's been keeping me up at night has to do with the Hand of Man, my big mechanical car-crushing sculpture. We've been working on getting it over here for the summer festival season, and for quite a while it looked like it was going to be easy. It's important to get it over here for income reasons, as well as reasons of making connections in the festival circuit.

A certain festival I've successfully worked with in the past (let's call it Festival A) was planning on bringing the sculpture over for a festival date early in the summer, and then storing it for another date late in the summer. They have enough money to bring it over and store it, and as an incentive to Festival A I have offered that they need only pay one-way shipping, from the USA -> Europe. The big time-lag between shows meant that I could book other festivals between, thereby earning money to help pay for the return shipping. In fact I did get very advanced in my negotiations with another festival that falls between the dates of Festival A (we'll call the other one Festival B). Festival B does not have enough money to ship the piece over from the USA or store the piece for long periods of time, so Festival B can only happen due to the big shipping budget of Festival A.

Then, last week while we were dealing with Kodiak's school and trying to secure this exciting house, Festival A suddenly informed me they were cancelling their first date at the beginning of the summer. My ability to appear at Festival B is now gravely threatened, as well as any other show I might try to book during the summer. It doesn't make sense for my to simply accept Festival A's second date (at the end of the summer) because I've only asked for one-way shipping, and one show date is not enough income to pay for return shipping or storage.

For the moment, the problem is unsolved, and the whole enterprise may fail. The situation is actually significantly more complicated than I've represented; it would probably get quite tedious if I recounted all the permutations. Suffice to say that there are backup plans, and backup plans to the backup plans. There are alternative festival dates being considered for Festival A, and there are overtures being made to Festival C and Festival D, in last-minute efforts to make the whole thing happen. It's a lot of work, and it's frustrating because so much of it is out of my control. And it's risky; one-way shipping is in the neighborhood of $10,000, so a cancelled date can spell financial disaster.

And to add fuel to the fire, I am running out of time. Trans-Atlantic shipping takes about 6 weeks, and Festival B is about 7 weeks away. So anyway, I will know within a week whether this is happening or not. Will update.

Well, sorry if that was boring. Life is sometimes a slog, and in the bigger picture I think it does a disservice to gloss that over. If anything, this post will be a reminder to me, when I re-read it in the future, of what this time was like. And, for those of you readers who don't have kids and/or don't have big sculptures that you are trying to ship to Europe, this post gives a glimpse of my world.

And to lighten the mood a little..... 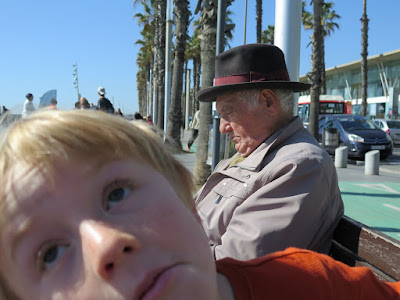 I will return to form soon, with more posts of art, both my own art and the art that inspires me. Stay tuned.