A lot of times it seems like life moves too fast to blog about it.

That’s especially true when you’ve got a baby.

Amazing, interesting things happen, and you think: “I should blog about that,” and the next thing you know you are changing diapers and trying to get to sleep so you can actually work the next day.

But here are some highlights from the last few weeks….

A while ago some friends here in Taos asked me if I could use my crane truck Herman as part of a “house-moving” operation. To be fair, it’s a very small house. But of course I said sure. Herman and another friend’s crane truck teamed up to move this little house about 40 miles, into the heart of town, and then to swing it over a short wall into a front yard. 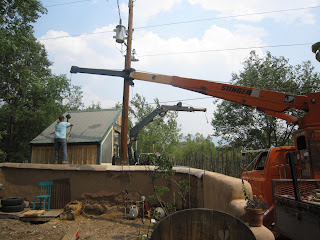 It was crazy, illegal in several minor ways, and really fun. 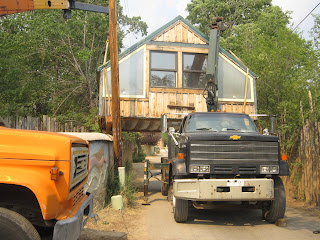 Prior to this adventure, I had been thinking that I would use Herman one more time to get my current Burning Man project to the desert, even though driving Herman is becoming an increasingly awful experience (due to it’s slowness and some transmission issues.) Well, using it to move the little house was the last straw. Shortly after that episode I decided that I had no choice but to upgrade. I found an awesome truck for sale online, and talked the seller down from $10,000 (which I could not afford) to $7,000 which I could barely afford. I’m not sure how I did that, exactly….. 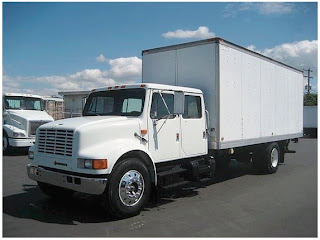 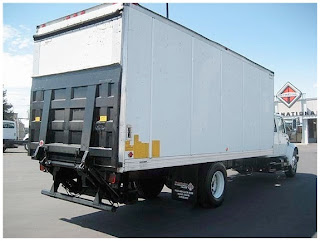 It has the best medium-duty engine you can get (IH DT466), a manual transmission, a lift-gate, and best of all, a crew cab! I will get my hands on it in about a week. Oooohhh I am EXCITED! Finally, a decent truck!!

And of course, as the summer keeps disappearing day-by-day, I spend most of my time working on my Burning Man project. I described it in my last post, but they say a picture tells a hundred words….or is it two hundred? I can’t remember, but anyway, here is the original concept drawing: 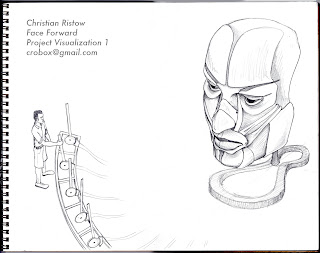 And here is a photo I just took this morning of the left eye and eyelid. The eyes and eyelids are almost done, and are all fully mechanized already. 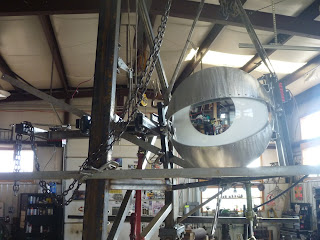 I will update more on this piece as it comes together.
Posted by Robox at 10:07 AM No comments: