Well, yes..... it's been a little over 6 months since I posted last.
But you know, things happen. Life gets in the way. Etc.

Needless to say, a lot has happened.
Kodiak is 6 months older (which is a big deal in the infant world!)
I built a big new sculpture.
I am about to start on a new one.
And then there's the eagle.....

Kodiak is indeed becoming a little person. Those of you who have kids already know about all the giggling and laughing and smiling and crying and burping and farting and pooping. Those of you who don't have kids have probably heard enough already... So I'll just leave off with a picture of the little guy..... 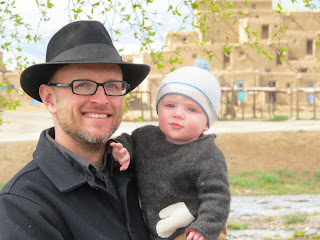 Back in January I learned the I was to receive a grant from the Coachella Valley Music Festival to build a new sculpture, entitled "Fledgling." That was of course great news, but the next pressing order of business was convincing my mom to move to Taos to help Christina and me take care of Kodiak, so that the sculpture could actually happen. Luckily this did not take much convincing (thanks mom!). Next up, Christina and Kodiak and I went to NorCal to get my mom's car and drive it back here. By the time all these logistics were dealt with, I only had two months to build the sculpture, which was.... let's see, how do I say this..... not really enough time.

Well, it did get done, barely. With lots of help from a few people.... thank you Cedar and Julie (and others).

Fledgling is a large mechanical bird, made from Stainless Steel, Carbon Steel, and Aluminum. It is modeled loosely on raptors, or birds of prey (eagles, hawks, and falcons). One person at a time, from the general public, is permitted to ascend the staircase up the tail-feathers and climb into the ribcage. In the ribcage is a seat and a pair of bicycle pedals. By pedaling, the operator sets in motion a set of gears, sprockets, chains, and cranks which cause the wings to open and close. There is a wing mechanism and a separate shoulder mechanism such that the motion of the wings is very close to the real motion of a bird.

So far Fledgling has performed at the Coachella festival, the Stagecoach festival, and Maker Faire. 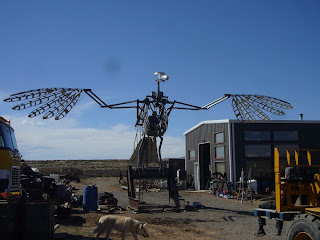 I am about to begin yet another large-scale sculpture, this time funded by (and debuting at) Burning Man. The piece is called "Face Forward." Here is the description furnished to the Burning Man website:

"Face Forward is a super-sized human face in which each of the major muscles and facial functions responsible for the creation of expression is individually controllable from a simple control station. These stations are arranged in an arc around the face, approximately 30 feet from it. Groups of people may assume control of the face, and attempt to make it laugh, smile, or make other recognizable expressions. The possibilities are endless!"

Face Forward will be about 12 feet tall (not including the base) and fabricated from the big three: Stainless Steel, Carbon Steel, and Aluminum. At first I intended to utilize cable-control for the control of the face (basically a steel cable in a semi-rigid housing; think: bicycle brakes) but for a variety of reasons I have decided instead to use radio-control. There is a relatively new breed of super-sized, very strong RC servos being made these days, in both rotary and linear configurations, that I am excited to experiment with and implement on this piece. I really do think the possibilities for this piece, especially in the wide-ranging world of theater, are endless. I'll be sure to post some pictures of the piece when it is done.

Last Wednesday morning I was running some last-minute errands before I needed to depart, at about 2 PM, for a four-and-a-half day Vipassana retreat in the woods. I was driving on the main road between our house and the town of Taos (we call this road the "highway" but it is a two-lane road, much smaller than any highway you would find in a city.) Anyway, I was in my big truck Herman, which tops out at about 60 MPH, cruising at about 58. A few miles from my house, I noticed what appeared to be a large brown lump on the side of the road. Without thinking much about it, I assumed this was probably a dead dog or a dead deer. It was pretty big.

At this point I should point out that I have always been interested in roadkill, and have collected certain roadkill, or parts thereof, for years. I should also point out that during the time when I was building Fledgling, I was studying raptors and raptor anatomy quite voraciously, and I had a fantasy of actually finding a dead raptor or other large bird on the highway.

So, back to the story.... About 30-40 feet before I was to pass this big lump on the side of the road, the lump unfolded it's enormous wings and took off, in flight, directly into my traffic lane. This lump turned out to be an adult Golden Eagle carrying a dead rabbit. I slammed on the brakes, putting a 30-foot skidmark down the highway, but still collided head-on with this enormous bird. I will guess that I was going about 25-35 MPH at the time of impact. The eagle dropped the rabbit, bounced off my grille, and flopped and rolled into the other lane. I pulled over immediately. Some retard in a small pickup, coming the other way but still 1/4 mile away at the time of impact, slowed down but rolled over the eagle anyway. Thankfully there was no tire-to-eagle contact, but the impact of the truck's differential caused the eagle to roll over again. I put on a pair of gloves and waled out onto the roadway and picked up the eagle by it's two feet. It appeared to be dead... not moving at all. I put the eagle into the back of my truck. I continued driving to my destination, which was a friend's house where I needed to return some skid-loader attachments. Every minute or two, while driving, I looked back at the eagle. For a while it still seemed dead, but then I looked back once and it was sitting up, looking around! I kept saying to the eagle, speaking out loud, "What am I going to do with you, man?" 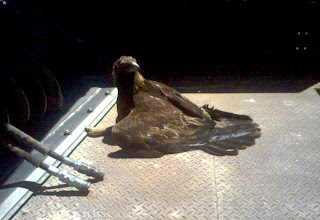 I got to my friend's house, and while I was unloading the attachments, the eagle, much to my surprise, hopped up onto the edge of one of the "gates" of the truck. It stood there for long enough for me to snap a picture.... 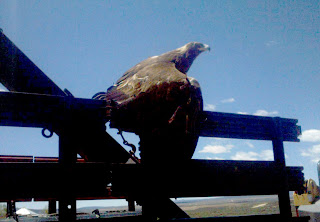 And then flew away! However, it was flying VERY low. Nevertheless, I thought it was probably OK. It flew just out of sight around to the other side of my friend's house.

I finished unloading the equipment and began to drive. As soon as I came around the other side of the house, however, the eagle was just sitting there in the sage. I knew he was not OK. Remembering that a blanket is the best way to capture a bird like that, I dug a moving blanket out of my truck and began to stalk the bird. Not much stalking was required; the eagle could neither run nor fly away from me. I threw the blanket over him (or her), wrapped him up, and put him in one of the truck's tool boxes. At this point I called Christina and she began making telephone calls to the wildlife hospital / rescue center in Española. I came home and took him out, unwrapped him, held him while Christina prepared a plastic bin (this was amazing.... holding such a huge and powerful bird in my hands.... he was STRONG and scared and beautiful... and huge) and transferred him into the bin. We went to town and transferred the bin to a friend who took it to the veterinary hospital in town where he was picked up and transferred to Española.

Christina and I hit the road on the way to my retreat.

Seven days later, upon returning from the woods, Christina and Kodiak and I went to Española to try to visit Mr. Golden Eagle. While we were not allowed to actually see him because he was still in the ICU, we learned that his injuries were not too severe (no fractures! just swelling and soreness in his left leg) and that he has a very good chance of return to the wild. We also learned that he is considered unusually aggressive... he managed to gore one of the hospital staff with one of his talons! Glad he didn't get me!

Does this story "mean" something? Does any story mean anything? I don't know. But I can't stop thinking about it. I intend to call every week or so and check up on his progress. I hope he goes back to the wild, and stays away from the highway.
Posted by Robox at 9:54 AM 4 comments: