It's about the frickin' IDEAS, man!

Is it mandatory for me to begin each blog post with some variant of "Gee whiz, it's been a long time since I posted!"? Sometimes it seems that way.

Well yes, it's been a while, and the reasons are hard to pin down, but they have something to do with the shift in perspective that happened since returning from Europe, and a seeming inability on my part to discern which events in my life are "blog-worthy." In Europe, people blowing their noses in a way that was "culturally different" from my personal background seemed blog-worthy, but here in Amerrrrrica things are less clear to me.

I ended the last post by saying that it was probably time for me finally tell the story of the almost-lawsuit that happened to me a few years ago. But... I'm no longer certain that there is any reason to tell it, perhaps other than the fact that I've teased so many times on this blog that one day I would. When that situation first unfolded, I wanted nothing more than to angrily tell everyone I knew what a fucked up thing was happening to me, but for legal reasons I couldn't. As time went on, and especially after the whole thing was resolved, the salacious and unjust details of the story faded in my mind, and I became more interested in forgiving and moving on.

Well anyway, here it is, finally: the much abridged version of what happened to "Earth Mover."

In the winter of 2015 I built a new sculpture for the Coachella Music festival, called Earth Mover. It was an ANT, built from heavy equipment parts. I thought it was a pretty good piece. 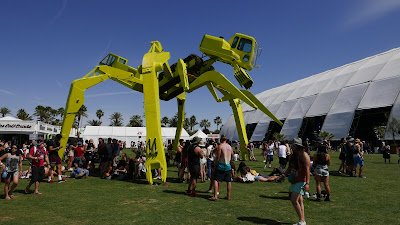 Among the people who helped me build the piece was a friend called Ugo. (I am changing all the names). When we assembled the piece at Coachella, Ugo was an excellent parter in the process. After Coachella I was approached by another festival who wanted the piece, and although I was unable to attend that festival personally, I thought I could send the sculpture without me, to be built by trusted crew members. I decided to send two guys, Ugo and Gabriel. Gabriel was my best friend; I had worked with him for years and trusted him totally. I had more experience with Gabriel, but Ugo had more experience with the sculpture. I thought they would make a good team. The festival appointed two local guys to assist, Caleb and Stew.

At the end of the second day of the sculpture build I received a call from Gabriel saying that the piece had fallen down catastrophically and that Ugo had been injured. Stew had narrowly escaped. 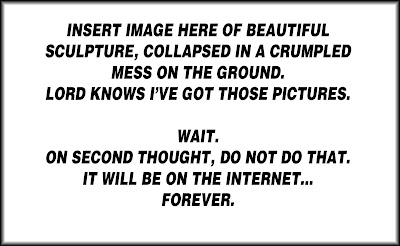 I flew out to the festival immediately, and through interviewing the various parties involved I learned why and how it had fallen down, and I learned also that there was no shortage of blame to go around, with most people laying the blame at the feet of one person in particular. The truth is that I will never know exactly what happened because I was not there; but there was a fairly high degree of uniformity among the various accounts.

Ugo was a friend of mine, and also someone that I knew struggled financially, so in the early days after the accident I helped him financially. I started and maintained a GoFundMe to help pay his costs. His injuries were neither serious nor trifling; rather somewhere in between. In the end, he got a shitty billboard personal injury attorney and decided to sue me and the festival. It was very difficult for me to find a lawyer. It was a terrible time in my life (and his, I guess) which lasted over a year, and it played a role in fueling my enthusiasm for moving to Europe. While we were in Europe, we all settled out of court. The financial hit to me (and my family) was significant, but not crippling. When we returned from Europe, I tried to find Ugo to give him a "no hard feelings" message, but he has left town and no one really know his status. I hope he is all right.

So that's really it. Ugo was injured and I don't know if those injuries have left a permanent mark on his life or not. He got some money, but probably less than he hoped for. I lost a sculpture, the future revenue I might have earned from that sculpture, a bunch of money, a bunch of sleep, and at least one friend (Ugo). My relationship with Gabriel suffered tremendously but seems like it might be on the mend. Moral of the story: Buy the appropriate insurance.

OK, Jesus... that's over and done with.
Finally.
Moving on.

Life in New Mexico for Christina and me continues to be a mix of parenting, homesteading, trying to make money, and trying to lead the art-life. We finally stopped working ON the shop, and have begun working IN the shop.

A few weeks ago I was alerted by a friend to an upcoming group show at a gallery in LA. The theme for the show was "Robot Love," and I felt that Big Mother (which I built in Berlin) would be a good fit. 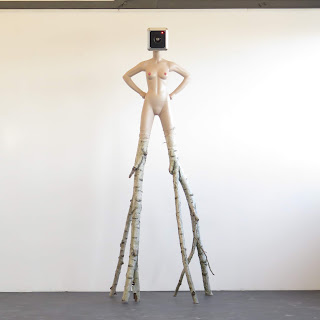 After the curator for the show agreed with me, I set about preparing the sculpture. For various reasons, I had decided to cut off the Birch tree legs of the sculpture prior to departing Germany, so the first order of business was to get her some new legs. After securing the appropriate permits from the BLM, I ventured out into the snowy wilderness and got her some new Aspen legs. 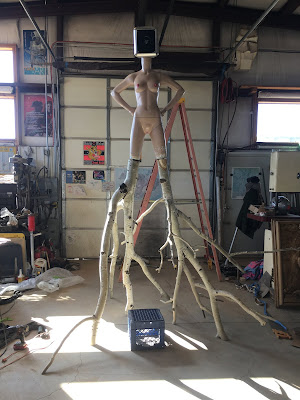 (Please note: the sculpture is not finished in this pic. Some of the "straggler" branches were removed, and the transition from tree to thigh was done properly, with tree bark.
I have a preference between the Birch seen above, and the Aspen in this picture.
Do you?)

Driving all the way to LA and back in the span of a few days was a bit ridiculous, just to show a sculpture, but what the hell... I guess that is part of being an artist. 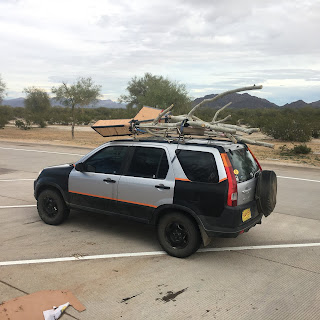 Say YES to opportunity when it arises. 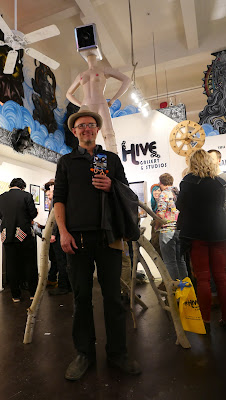 I'm currently facing approximately four different projects which will keep me out of the shop, lashed instead to my laptop and a sketchpad for the next week or two.

1) Readers of this blog will probably remember from last year that the process for securing a grant from Burning Man to build new work begins with a Letter Of Intent (LOI). Well, Christina and I have both passed this stage of the process successfully, meaning that the next phase is to work up a full proposal for submission by the January 15th deadline. Lots of work ahead.
My proposal this year came to me in something of a "flash of inspiration," rather than a labored calculation. I tend to trust those ideas more.

2) About a month ago, Burning Man reached out to a certain group of "their" artists to solicit ideas for a certain important design element of the city, and I was invited to participate in this. Very exciting! Lots of work ahead on that as well.

3) A good friend of mine is spearheading a team to try to begin, from the ground up, a new interactive art space in the tradition of The City Museum, or Meow Wolf, and he has invited me to be one of the very first artists involved. This is also very exciting, and I'm grateful to be involved. I have quite a large space to fill with some sort of interactive sculpture. It's all about the ideas. And a rough draft of those ideas is due soon.

4) I'm putting some finishing touches on a self-portrait drawing which will be included in a Taos show of self-portraits in January.

It's clearly a phase of gestating and birthing new ideas. It's really the hardest part of making art (by which, of course, I mean just about anything ranging from finger-painting to fashion to film-making), because it is the most important and most critical. Anyone can train himself or herself to be a good craftsperson, or at worst can pay someone else to do the craft for them. But no amount of slick and sexy craftsmanship can disguise a shitty idea. Flashy movies with weak plots always tank after the opening weekend. Beautifully crafted sculptures which are fundamentally about nothing sometimes have longer legs, because the masses are wowed by glitz and glamor, but I don't personally think they will stand the test of time, and I'm not fooled by them even for today. On the contrary, a brilliant idea or a gripping story can sometimes find its audience even when presented in a poorly crafted package, and if that idea is lucky enough to be delivered in a well-crafted presentation, it is practically guaranteed to find success (OK, that's a bold claim... at least such an offering will have integrity... and probably deserve an audience, even if it doesn't find one).

So that's a lot of art-theory and opinion mumbo-jumbo, but now it's up to me to live up to it. Gotta find some good ideas.

One glitch for me... a personal limitation I am trying to overcome, is the limitation which unconsciously says "don't dream up ideas which you are not personally capable of seeing through to fruition." I know my skills; yes, sometimes they expand and that is exciting, but I also know what I don't know (how to do). Sometimes I feel that my intimate knowledge of my own limitations has a too-important seat at the table during the idea-generating phase. After all, other people with other skills are out there. Yes... it's easier to connect with them in Berlin than it is in Taos, but we have the internet. And electricity. And toilets. (And laser cutters and CNC mills and 3D printers....)

Speaking of Berlin... I went through a phase about a week ago in which I was actively missing the place. I miss Dussmann Das Kulturkaufhaus and the Spree and KOAS and Schlachtensee and I miss bicycling through Prenzlauerberg  and the S-Bahn and BBK and Kreuzberg and Friedrichshain and the Schnitzel and the Schwarzbier and all the great people we met there and who helped with the sculpture. You know who you are. Berlin is a great place, and I hope to return there one day, if only for a visit. 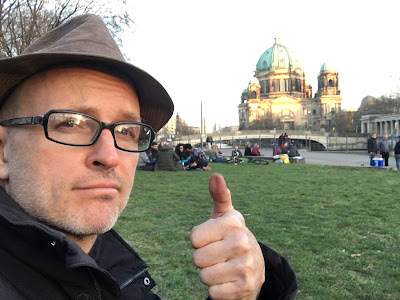 And... here is the best news of the month:  The only food I actually miss from Spain, the only food I ever blogged about (OK, except for Schnitzel and Schwarzbier), the amazing blue cheese known as Cabrales... which I thought I would never eat again... is available from our very own home-town over-priced natural foods store!! I don't care that much about food, in general, but mmmm.... Cabrales!