Wow... you let a few weeks go by without blogging and suddenly writing a new post seems quite daunting.

Looking through my pictures, the following topics present themselves for discussion:


I think I can get through a lot of that stuff. If it all gets too long-winded, I will save some of it for another post. 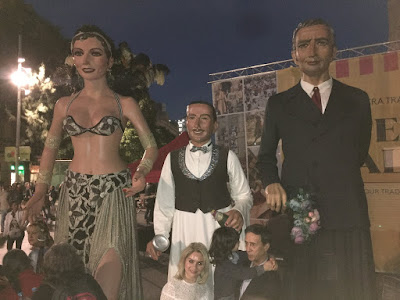 This picture actually dates back to one of the first nights we were here in Barcelona. We were wandering around the Gotico, quite close to where we ended up finding our flat a few weeks later, and we stumbled upon this. These giant puppets are a feature of festivals all over Spain. Each puppet is controlled by a single person who is inside, basically wearing the puppet. We were pretty excited to come across these, and I still don't know at which particular festival we inadvertently found ourselves.

There is an upscale hotel in the Raval, which seems to be almost universally hated by those who actually live in the Raval, but which has an open deck on the top floor that affords a 360º view of the city. Here, our friends Grey and Nova show us the sights... 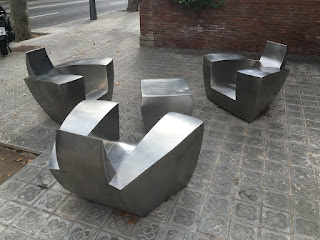 One thing I enjoy about Barcelona is that there is an acknowledgement in the city planning of the fact that people want to be outside, and... might actually want to sit together! Outdoor seating is everywhere. It's not uncommon to find this kind of arrangement, two or three seats permanently affixed to the sidewalk in such a way as to encourage conversation. 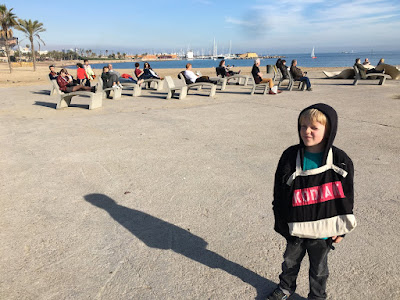 And I had to smile when I saw this... cast concrete, municipal-issue sunbathing chairs down by the beach. 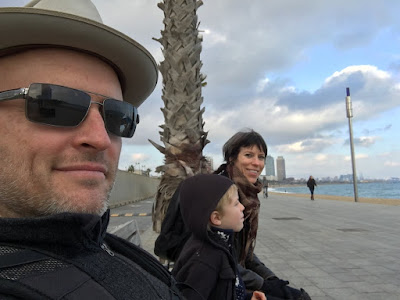 And yes, we do go to the beach fairly regularly. It's awesome.

2)  OK, section number two of today's post.... the Christmas break. Kodiak had two-and-a-half weeks off of school for Christmas and New-Years, and we made pretty good use of the time, doing some things we wouldn't normally do. 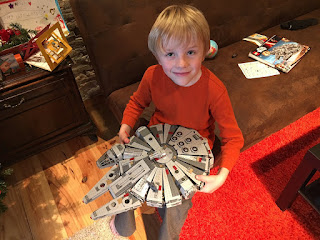 Santa was pretty good to Kodiak, bringing him, among other things, a Lego Millennium Falcon (for ages 8 and up!) 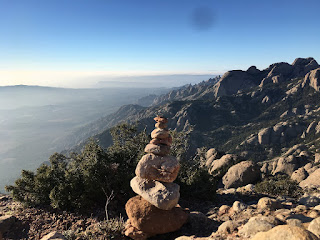 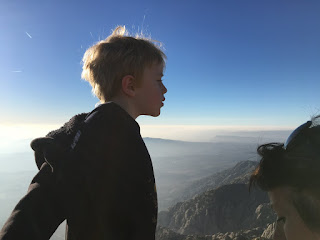 We got out of town and visited the mountain hermitage of Montserrat ("serrated mountain"), where we did some reasonably challenging climbing. It felt good to breathe some mountain air.

We visited a pretty spectacular natural history museum. This was one of many pictures I had to choose from. 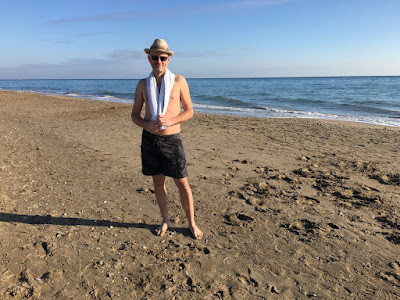 And, in keeping with a New-Year's Day tradition in Spain, we swam in the Mediterranean on January 1st.  You know you're in Spain when you will actually consider swimming in the ocean in January!

3) As far as finding a place to be creative, and try to make some new work... It's been a bit more difficult than I initially expected. Upon moving here, I was at first really excited to find that there are quite a few "open" studio sorts of places, where one can rent a studio among other artists and do what you want. Further inquiry, however, has revealed a slightly less rosy picture. First off, most of these places only want painting and drawing; sculpture makes noise and dust and no one likes noise and dust, right? Secondly, basically none of these places have any collectively available tools, which is a real problem. An open space is exciting, but if you have to pay rent for it, and then also have to buy all the same tools that you already own in the US, it's significantly less exciting. We did visit one "metal shop", with some tools available, but the tools were underwhelming and the rent was high. 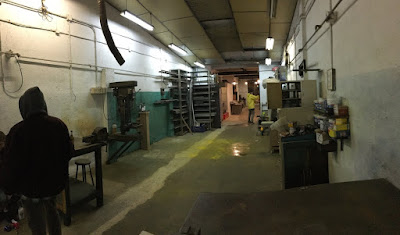 I did manage to find one shop that holds some promise, called Transfolab. Sorry for the lousy picture, there are better ones on their site. Despite their selling themselves as a "Center for Trash Investigation," I would more accurately call it a workshop, open to the public for fabrication in wood and metal, with nice wood tools and very basic metal tools. The fee to work there is €5 per hour, and the folks who run it are super nice. 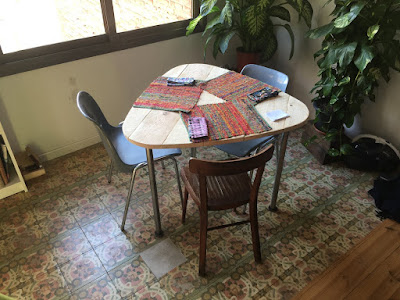 Not long ago, we had an idea to get a small breakfast table to put over by the windows, so that we could eat together in the morning in natural sunlight. The fact that IKEA had nothing suitable was a blessing in disguise, as it gave me just the right pretext upon which to visit Transfolab for my first visit. It took a little less than 5 hours to build this little table for 3. Not bad for €25.

This evening I will finally have time to attend a meeting which should be informative about yet another possible studio space...

While this space is quite large and promising-looking, it is unfortunately on the second floor and accessible only by a narrow staircase, which is a big strike against it. On the other hand, it is part of a socialist collective called Can Battló and the use of the space is free. And, there does exist the possibility of being able to move larger objects over the railing at the left, if I am not mistaken. Also, there is a separate workshop downstairs, run by a different department (Department of Infrastructure) which is better-equipped than any workshop I've yet seen in Barcelona (which is not saying much). They do have a welder, as well as a lathe and a horizontal mill. The meeting tonight should give me a better idea of what it's going to take to work here.
Will update.

Well I guess that's about it for now. I don't have it in me to write much more, and you probably don't have it in you to read much more. So I'll leave you with a few thoughts that have rambled through my pre-frontal cortex on the topic of moving... I've noticed a subtle change occurring in me over the last 4-6 weeks, and I find it interesting. In the first month or two of being here in Barcelona, I was a wide-eyed tourist, always looking up, trying to take it all in. There's something lovely about that "tourist mind". It's very open. But eventually, and this is the part that I find so interesting, it starts to shift. I'm sure that you, my reader, can easily picture the difference between a tourist on the street (eyes up, mouth open, camera at the ready) and a weary urban city-dweller (eyes down or maybe covered by sunglasses, hands in pockets, earbuds in). Well, if we pretend that this seasoned city-dweller moved here to the big metropolis five years ago, let's say, we can then also imagine that he was not always that way. What changed? and when? and how? With me, I noticed at some point recently that instead of training my eyes on the faces of my fellow metro passengers, I started to carry my earbuds and listen to music on the train. Instead of rambling slowly down the street, eyes scanning for the next beautiful sculpture or significant cultural difference from the good old USA, I've started to walk a bit more quickly, eyes less frequently straying above the ground-floor level of buildings, mind wandering off somewhere (which incidentally makes you "blind", in a certain way). One interesting result of this process is that I think this subtle shift is perceivable by others. What I mean to point out is that it's more common now for passersby to speak to me in Spanish, mistaking me for a local, than it was in those first weeks, even though I dress the same and have not adopted any particularly "Spanish" physical or aesthetic attributes. But this minor and amusing side-effect notwithstanding, I think this subtle shift is basically a small tragedy. How many times have you asked a "local" if they've done all those amazing activities on offer in their own city, or been to all those amazing museums just around the corner, and been told "no, I haven't." I think that when one slowly and imperceptibly adopts the pace of the city, its basically a process of closing. Maybe it is too exhausting to us humans to be that open all the time. Maybe the energy of the city is too assaulting, too intrusive. Maybe we need to put the earbuds in, the sunglasses on, and pull the hood down just to maintain a little private space in cities. After all, I notice that when I am super-open to the world around me, I do tend to pick up on those sideways glances which are all too easy to interpret as "damn tourist, what are you doing in MY town?" A little personal shielding does help deflect all that bullshit. But then again, isn't that their problem? I realize now that I am starting to go around in verbal circles, throwing out a lot of ideas, but that is a testament, I would say, to the complexities of the topic. Let me just leave it by saying that I believe it's good to keep those eyes open. Have the eyes of a child. Don't change, baby.

Those thrilling topics of • Sculpture and • Politics (or, the visual evidence of politics in the city) will have to wait.

And oh, just in case you forgot.... Dinosaurs evolved into birds.